It takes courage for a 9-year-old to come up with an idea and then do what it takes to make it happen. That’s just what Anzia from Troop 41486 on Mercer Island did when she had a great idea, fulfilling the Girl Scout mission every step of the way. Anzia and her family follow a vegan diet and lifestyle, which means they don’t eat any animal products or by-products. Since Girl Scouts of Western Washington doesn’t currently offer a vegan Girl Scout Cookie, Anzia decided to have her own vegan cookie and baked goods sale.

After her first sale in 2012, which Anzia ran with the help of her family, other troop members asked to participate. This year, eight Girls Scouts helped during the sale, which was held at the Wayward Vegan Café in Seattle: Anzia, Audrey, Isabel, Grace, Rian, Abbie, Ally, and Lara. They sold cakes and cookies and, because mint and chocolate are one of Anzia’s favorite flavor combinations, they made sure to have a gluten-free, vegan version of the Thin Mint. Girls helped in different parts of the process from making the mint cookies to selling the treats at the bake sale. The girls did all this work on the vegan bake sale on top of their own Girl Scout Cookie sales.

Anzia was excited to do some taste-testing before deciding what to sell. “I tasted the cookies and all the icing. My mom would also cut a little bit of the cakes off to even them out and I was able to taste those. The first year I was able to bring a piece of cake home for myself. The second year everything sold out, so I didn’t get any.” The cakes tasted delicious, and the bake sale sold out within an hour and a half! 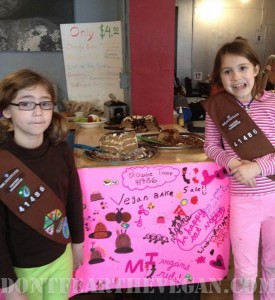 Stephanie, Anzia’s mom, says the success of the bake sale was all thanks to the support from the Seattle vegan community. NARN, Seattle Vegan Score, Wayward Café and many others helped spread the word on their social media sites. Stephanie also has a blog called Don’t Fear the Vegan, where readers learned about the sale.

In 2012, profits from the sale were donated to Pigs Peace Sanctuary because Anzia loves pigs and this non-profit owns a vegan grocery store their family shops at called Vegan Haven. This year, Anzia and her troop members earned $500 from the sale and donated half the money to NARN. “We met a few of the women that work for the organization and we knew they were doing a lot for animals all around the Pacific Northwest,” Stephanie said. Anzia will decide with her troop which animal organization they’ll donate to next year.

Anzia and her troop members learned a lot from the bake sale. “I simply had hoped that the girls would learn that it’s okay to stand up for what you believe in. I believe the girls have learned that and the importance of helping others even if their beliefs are different than yours. I also feel they’ve learned a little about what motivates vegans,” said Stephanie.

Anzia has a lot of goals for next year’s sale. As the girls get older, they will most likely be able to help more in the baking process. Stephanie is also hoping for more volunteers to help bake treats so they won’t have to turn people away and sell out so quickly. In addition, Anzia said she wants to make sure there are vegan treats for dogs, too.

Anzia said her favorite part of the bake sale was helping out her troop and the animals at the same time. For other girls interested in doing a similar bake sale, she has a few suggestions: “Find a place that will let you host it. Get as many people as possible to help bake, and tell all your friends so that they can come support you.”

We think these are great words of advice, and we’re proud of Anzia’s great work doing something she believes in, and helping to make her community a better place because of it!

Though not vegan, Girl Scout Cookies can be eaten by vegetarians who consume dairy and egg products. Our bakery, Little Brownie Bakers, determines what ingredients to use in its cookies. If you would like to learn more about the cookie varieties offered or contact the bakery directly for more information, call (800) 962-1718 or visit www.littlebrowniebakers.com