Did you know sea cucumbers can take their guts and spit them outside their bodies as a form of protection? Or that starfish (also known as sea stars) actually push their stomachs through a tiny hole, outside their bodies, in order to eat, and then pull them back in when they’re done? Talk about going OUT to eat!

And while we’re on the topic of tummies, seahorses have their own secret tricks. Male seahorses carry the babies in their stomachs – not female seahorses. The female deposits the eggs inside the male, they get fertilized, and the male expels between 10-100 babies, even having real labor pains!

And the otter uses its tummy as a table, resting food like clams, sea urchins, sea stars and octopuses there while it eats. When they’re not hungry, otters will store food under their armpits, and eat it later. 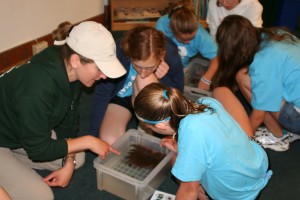 Spend a few hours with Genny Arredondo, a marine educator at the Seattle Aquarium, and you learn some awesome fun facts about the creatures that live both beneath and above the water.

“I grew up going to the Seattle Aquarium,” she recalls. So it’s no wonder she gets all googly eyed when talking about actually working there. It’s kind of her dream job.

She gets to spend her days working with students in grades K-12 who come to the Aquarium, toting around tubs full of mushy, prickly and slimy sea creatures.

Genny is a traveling encyclopedia, and has all sorts of fun facts to share about the creatures of the deep, which are mostly a mystery to us.

For example, that sea cucumber who can spit its guts outside its body for protection? It can actually grow back new guts. Genny learned that the hard way when she was scuba diving in Australia, and a sea cucumber spit up all over her.

What are all those tiny hairs on the edge of a jellyfish?

Genny says those thin hairs can help a jelly fish catch food, but are mostly there to help with movement.

Genny received her degree in environmental science, with a focus on marine ecology. She never set out to become a marine educator, but realized that once she started looking for people to talk to about her research, she became interested in the education side of things. Her work at the Aquarium is a natural fit for her interests, where she helps people engage with ocean life in a way they hadn’t before, so they understand how important it is to conserve the world’s oceans.

“You have to first care,” Genny says. “So I inspire the care, which inspires conservation! Watching a kid get it and make connections are moments I live for. When they want to take the next step in their learning, it’s pretty awesome. We only have one planet.” 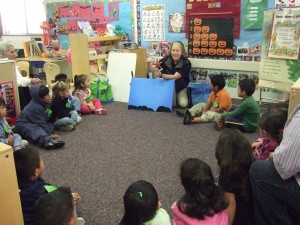 Genny sees about 40,000 students a year come through the Aquarium’s doors. She has taught Girl Scout and other community groups, but works mostly with school groups.

The community aspect of her job is something she really enjoys, and it most likely stems from the community service work she did as a Girl Scout.

As a Brownie-Cadette in Bellevue, Genny remembers doing a lot of nature restoration work, and volunteering in homes for the elderly.

“The community service I did as a Girl Scout helped shape who I am as an adult, and how I give back to my community,” she says. “I love the leadership and confidence building that Girl Scouts does. It built a lot of self-esteem in me, which allowed me to pursue things I might not otherwise have pursued.”

“One year, I sold them in front of an ATM,” she laughs. “That way, people couldn’t tell me they didn’t have any cash!”

That kind of smart thinking isn’t unlike that of an octopus, which Genny says is a highly intelligent animal. “An octopus can unscrew a jar to get food,” she says. “And it can also change the color of its skin based on its mood. It can serve as a form of camouflage, and also as a signal to other octopuses.” 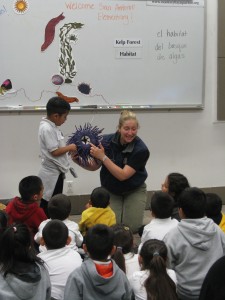 All this fun stuff is just in a day’s work for Genny Arredondo, marine educator, conservation junkie and Girl Scout! Thanks, Genny, for sharing some of your stories with us.

Genny’s tips for those interested in marine science careers: