When you turn on your TV to watch the weather, it usually appears as though the people you’re watching could give their reports with their eyes closed. They’re confident, funny, comfortable behind the camera and super knowledgeable about the subject.

Ever wonder what things look like before the camera starts to roll?

Shannon O’Donnell, weekend weather anchor for KOMO 4 TV, showed Girl Scout staffer, Stefanie Ellis, and her Girl Scout friend, Zeinab, just how hectic (but fun!) the life of a meteorologist can be. When she arrives, several hours before her first broadcast at 4, she is busy researching weather patterns, forecasting temperatures based on that research, Tweeting and blogging, running between radio booths and TV studios for live forecasts – all after remembering to take the curlers out of her hair!

Though the life of a TV personality is an exciting one, everyone you see behind the camera has to do their own hair and makeup, and make sure they are well prepared to go on camera and give their viewers the right information.

“Weather is all ad-libbing,” says Shannon. “You have to give a clear, concise, but informational impromptu report in about two to three minutes! We don’t have a teleprompter like the news or sports anchors. We just talk away!”

Being able to ad lib on live television takes practice, and practice is something Shannon had plenty of when she was learning to become a TV meteorologist.

How it All Began

Not many second graders know with certainty what they want to be when they grow up, but that’s exactly when Shannon got the weather bug.

“We studied weather when I was a second grader at Eastgate Elementary in Bellevue,” she remembers. “I became obsessed! I loved weather, and I loved to talk, so talking about weather seemed like the right thing to do. From age 7 on out, I worked toward that goal. I loved math and science, and really focused on those subjects in school.”

When she was in high school, she contacted KIRO 7’s Harry Wappler, and he let her job shadow. She knew the University of Washington had a great Atmospheric Sciences program, so she went there to major in meteorology.

By her junior year, she was interning at KING 5, where she found a great mentor in Jeff Renner. “He is very particular and measured in the way he approaches his forecasting each day,” she recalls. “I still use that same ‘method to the madness’ approach in my daily forecasting.” 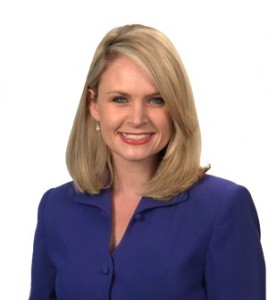 During her senior year of college, Shannon got a job as a weather producer at KOMO for Steve Pool. She later took an opportunity at Northwest Cable News, but is quick to credit Pool for her comfort behind the camera.

“Steve helped me make a great audition tape when I was his weather producer,” Shannon says. “KOMO was so wonderful about giving me the run of the place while the crew went on their dinner break. They would keep the lights on, the camera rolling and the green screen ‘hot’ after the show was over at 7 p.m., and I’d just practice, practice, practice. Steve gave me tips and pointers along the way, and the one I remember most was to just be myself. I think the most successful TV personalities are truly themselves on TV, and people seek out and watch the person they identify with the most.

Though she knows statistics, and has a detailed scientific background most of us don’t have, Shannon makes sure those of us without her expertise still understand what she’s saying. That approachability is refreshing, but not as refreshing as her authentic and warm personality. She manages to stay herself both on and off camera, which is pretty remarkable, given the incredible amount of multi-tasking she does between forecasts! 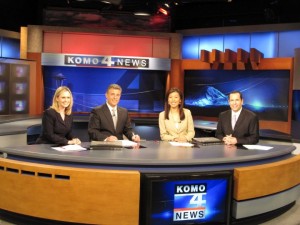 Just to watch her gracefully step over the giant TV cables snaked across the studio, as she walks from camera to green screen, green screen to the anchor desk – in heels, without tripping – you would never have a clue she just ran up several flights of stairs after a relaxed-sounding radio broadcast, sent out a Tweet and a blog post and entertained her Girl Scout guests just before ad-libbing the weather.

Now that is an awesome woman!

“I LOVED being a Girl Scout,” Shannon recalls. “I started Girl Scouts the same year I became fascinated with meteorology, so the two go hand in hand for me. I remember selling (and eating) cookies, of course. That prepares you by getting you out of your comfort zone and helps you converse with strangers. I also remember having a great time at Girl Scout Camp River Ranch. Being a Girl Scout enabled me to have memorable, bonding experiences with other like-minded girls, and prepared me to do the same as a young adult, right down to staying up late, singing songs and playing games!”

Shannon’s Advice to Girls Who Want to Go Into Meteorology:

“Stay focused on your goal. No matter what age I was – 7, 13, 19, 21 – I would always ask myself what I could do right now that would prepare me for a career in meteorology. Sometimes it was just taking more math and science courses. Sometimes it was reaching out to a meteorologist to see if I could job shadow. Sometimes it was obtaining an internship or a job in that field. Each step took me closer to my goal, and if a girl stays focused on her goal like that, the same can happen for her!

Also, Science, Technology, Engineering and Math (STEM) careers are so much more plentiful and stable than some other job paths. Medical science, research, engineering, computer coding…these careers all stand the test of time. Even in the worst of economic times, everyone still seems to need good engineers or coders!”