So last spring, we gathered a group of girls together to talk science. They were in grades K-8 and from diverse, low-income communities where access to STEM opportunities is often limited. We didn’t tell the girls what the conversation was about beforehand—we wanted to see their immediate, real-time response to the idea of STEM programming.

When we introduced the word “science,” their reactions were alarming.

Several girls walked out. Others said we’d tricked them. Almost every girl said science was boring, and many said it was difficult, hard or frightening. Almost no one could describe what an engineer does.

We took those reactions as a challenge: how could we get these girls to engage with STEM—without scaring them off?

It was pretty obvious that a lot of the girls didn’t even like the word “science.” So we tried something else: we asked them what they were interested in. “Roller coasters” and “fashion” were two frequent answers.

With those topics in mind, we decided to try something a little different: show girls the science in what they already loved. So this summer—with the help of grants from Tacoma Public Utilities and Google—we piloted two programs: one that connected the dots between fashion and function, and one that showed girls how to engineer amusement park rides! 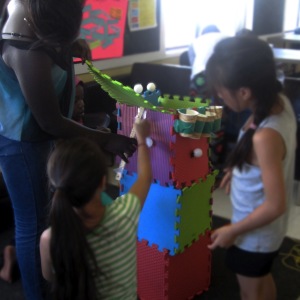 In the K-5 grade pilot program, the focus on fashion was exactly what the girls wanted to hear. Through a seven-week workshop, they explored outfits, fabrics and decorative accessories. What they didn’t realize—at first, anyways—was how much science they were learning, too!

In the first part of the program, the girls learned how to design an outfit to help people protect their skin in sunny places. They tested UV-reactive beads and examined fabrics to discover their protective qualities.

In the second half of the program, the girls focused on how fashion impacts the earth. Recycling, waste management and “upcycling” were all big topics. The girls also dove into the world of smart fabrics—fabrics that use technology to do more than just keep people warm. They took time to envision their own ideal smart fabric, and then actually create a smart accessory that used electricity to shine! 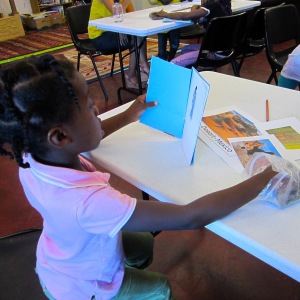 Winnie, a fifth grader, was excited about her project: “I loved learning about circuits and making the light-up accessory. Technology can be pretty fun.”

Partway through the program, the girls started to catch on. “I see what you are doing,” said second grader Diane. “You are tricking us into learning science and having fun!”

For girls in grades 6-8, we took a different angle: amusement park design. By the second week of this seven-part series, girls were creating kicking machines—the basic building blocks of amusement park rides—that used kinetic energy, pendulums and other forces to work. 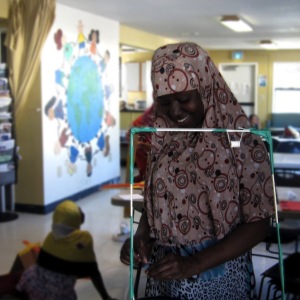 In the second half of the program, the girls worked together to dream up their own machines.

The machines had to accomplish a specific task, but each one was built totally differently. “I like trying to figure out how I can make this machine work better,” said Zeinab, a seventh grader. “It is fun to work together and come up with new ways to lift this ping pong ball up onto the table.”

Just as with the younger girls in the fashion program, the older girls were doing something some of them had never done before: having fun with STEM. Many of the girls’ past experiences with science had been so frustrating that they wanted to give up when their first try didn’t work. For these girls, just completing the building challenges was an accomplishment. 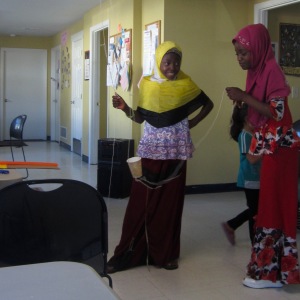 One girl was enthusiastic about the progress she was able to make on her group’s kicking machine after getting frustrated during the first few minutes.

“Building that machine together was not as difficult as I thought it would be … I was in charge of the pendulum which I think worked really well after we shortened the string … [it] was actually really fun!”

At every meeting, the girls also talked about what kind of STEM jobs are out there. More importantly, they started thinking about the fact that they could actually do those jobs one day. For some, it was a total revelation. As Titi, a seventh grader, put it: “the main thing that I learned was that women can be engineers.”

In western Washington, there are tons of examples of Girl Scouts who love science: girls who took a Girl Scout Science workshop on rockets and decided to become engineers. Girls who focused their Gold Award projects on helping younger kids engage with science, even when schools don’t have great resources. Girls who traveled to distant countries to help others with serious medical problems and decided to become doctors.

But it’s not enough to support Girl Scouts who already love science, technology, engineering and math. That’s why we are proud to pilot programs like these summer series, to inspire—and empower—even more girls through STEM.

Girl Scouts of Western Washington could not have offered these pilot programs without the support of generous donors, especially Tacoma Public Utilities and Google Community Grants Fund of Tides Foundation. Thank you for making innovative programs possible for girls in western Washington!