When Kaitlin Alayo started Girl Scouts in kindergarten, she had no idea it would eventually bring her to rural Peru—and change the way she sees the world.

This past January, Kaitlin Alayo stood in the middle of a dusty clinic in the rural outskirts of Cusco, Peru. She fiddled with one of the recycled hearing aids she’d brought with her from Redmond, working to get it properly fit on a young woman.

“She was pregnant and she was so excited to be getting the hearing aid—she’d never had one before—because she’d be able to hear her new baby cry for the very first time,” remembers Kaitlin.

How it All Started

Kaitlin’s connection to Peru is close to home: her father grew up there. Kaitlin visited for the first time several years ago and was both blown away by the beauty of the land and by the intense levels of poverty she saw there.

“The main town square in Cusco is so beautiful, but as you get farther out from town, it gets more rural and you can see that lots of people are living in poverty. When I first got there, it was really shocking.” 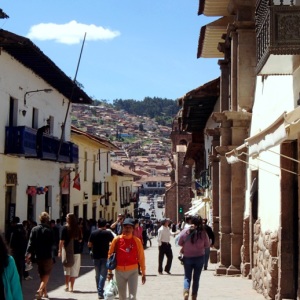 In particular, Kaitlin became aware of some of the health issues people there faced. “I want to be a pediatrician,” she explains. “I saw that basic health care was very limited and very expensive, especially in rural areas.”

Even the simplest piece of equipment—a pair of glasses or a basic hearing aid—can be hard to come by. “There are so many Peruvians who never get to enjoy full or partial hearing or good vision because they don’t have the opportunity to have a hearing aid or glasses.”

As a long-term Girl Scout, Kaitlin knew what do when she identified a problem: take action! From the day that she returned to the USA, she says she “knew that I wanted to do something to help the people there that needed it most.”

The Project: Sharing Sight and Hearing in Peru

When Kaitlin started researching glasses and hearing aids, she realized that, in the United States, people don’t usually recycle their old equipment—which means there are a lot of perfectly good devices lying forgotten in drawers.

“Here, people don’t really re-use them much,” explains Kaitlin. “A lot of the time, they get stored and a lot of them wouldn’t ever be used again, especially the hearing aids. But, as long as they are properly cleaned and have good batteries, they can be used!” 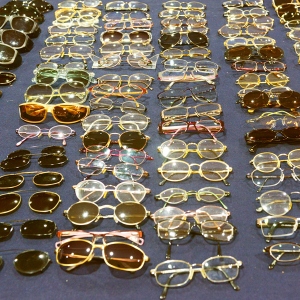 With that in mind, Kaitlin decided she would collect used and donated hearing aids and glasses that could be distributed in the rural communities outside of Cusco.

From her experience completing her Girl Scout Silver Award project—when Kaitlin worked with other Girl Scouts to furnish an entire home for an at-need family—she knew that tapping into her local community would be key to her success.

So Kaitlin reached out to retirement communities, doctors, small businesses, friends, family and her Girl Scout community. The donations started flowing in, but a bigger change happened too: Kaitlin started feeling a greater sense of connection to the people who lived in her own backyard.

For example, she got to know the people at her local senior center—a group of folks she wouldn’t have interacted with at all without her Gold Award work. “It was really cool!” says Kaitlin. “They invited me to events and let me advocate for my project.”

Kaitlin began with a goal of collecting 50 hearing aids and 30 pairs of glasses. But with the help of dozens of Redmond citizens, she ended up with 98 hearing aids and more than 150 glasses! 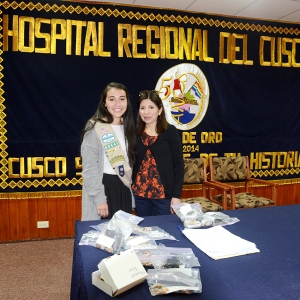 Kaitlin also reached out to build her community connections in Peru.

Specifically, she worked with a local doctor who helped her coordinate visits to clinics and introduced her to local ophthalmologists and audiologists who could help prescribe the glasses and maintain the hearing aids.

And this January, armed with a suitcase full of the donated gifts, Kaitlin traveled to Peru.

Once she touched down in Cusco, Kaitlin went straight to work delivering the prescription glasses to the ophthalmologist, handing out reading glasses at local markets and working side by side with an audiologist to help fit each hearing aid. 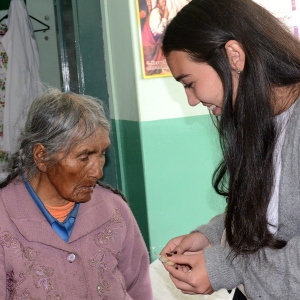 That’s when she got the meet the pregnant woman who was looking forward to hearing her child for the first time, and many more people in the community.

“One of the ladies was older and her hearing loss was really bad—she could barely hear anything. When she got the hearing aid she just broke out crying,” remembers Kaitlin. “It made me feel like all the work was so worth it.”

Continuing to Build the Community Connection

Kaitlin’s visit to Cusco was both the culmination of her Gold Award Project and an inspiration to do more work in the future. 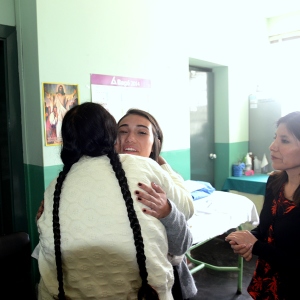 “I really hope to go back, but for right now, I’m staying in touch with the doctors,” Kaitlin explains.

She’s also working to directly connect the organizations that donated equipment with the doctors working Cusco—that way, the work she’s started can be sustained.

Her hope is that the people in Redmond and Cusco can have an ongoing relationship that will grow stronger each year.

“Girl Scouts has helped me be a citizen of the world,” says Kaitlin, if you ask her how it’s impacted her life. “I’ve learned how to be a leader. It really taught me not to be ashamed to do my own thing and be more out there.”

But her biggest take-away from Girl Scouts is the idea that your community—your sisterhood—can extend way beyond your own backyard.

“My definition of sisterhood was changed, from a relative or a good friend, to any girl in my community. It isn’t just about people that you know, but is on a greater scale,” states Kaitlin. “I now fully understand the power of sisterhood in the world.”

The Go Gold series features some of our amazing Gold Award Girl Scouts. If you know a Girl Scout who’s doing cool stuff in your community, let us know! Email web@girlscoutsww.org.