What does it take to build a library halfway around the world? To find out, Port Gamble Girl Scout Martha took on the challenge. 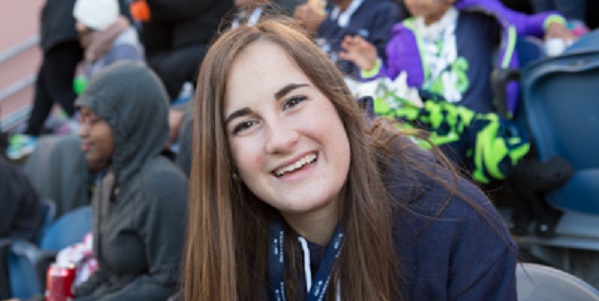 Growing up, Martha Rabura understood that education was important. “My mom’s a teacher,” she explains simply.

But it wasn’t until high school that Martha realized how many young people—especially girls—don’t have access to education.

“I went to see the documentary, Girl Rising, at a local theater. While the documentary only shared the stories of a few girls, their stories symbolized the 66 million girls in the world who have been thrown away, forgotten by their countries and denied the human right of an education,” she pointed out in a recent Legion of Youth interview.

“It’s one thing to claim I understand the importance of education but I walked out of that theater wanting to fight for it.”

And she knew how she wanted to make a difference: through her Girl Scout Gold Award Project. At a Gold Award workshop, Martha had “heard an advisor urge, ‘don’t create a project, find a problem you want to solve in your world and create a project out of your passion.’ And I knew this was my chance to stop preaching and start doing.”

Her goal: help combat illiteracy by creating a library for a community in need. She contacted Children of the Nations—a local organization that works to improve kid’s lives through education—and asked if they knew of a community who needed a library.

“And they actually did!” exclaims Martha. “I was like, wow, it’s meant to be!”

Researching the Root Cause

Children of the Nations suggested Martha work with the Mallory Jansen Memorial School—a school and orphanage in Sierra Leone. At that point, Martha knew she had some research to do: “I didn’t know anything about Sierra Leone!” 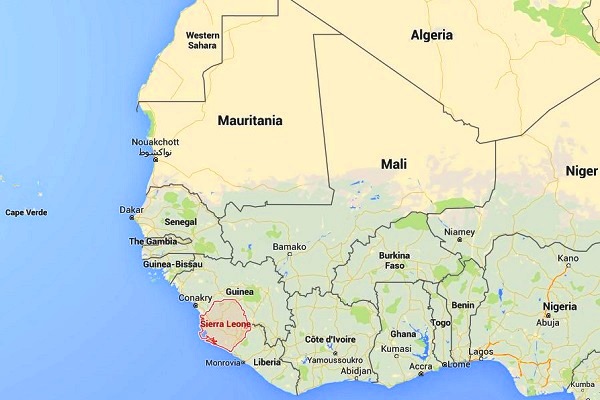 So she set out—with the help of her advisor, Sarah Saunier, Children of the Nations’ Sierra Leone Education Specialist and Education Director Assistant—to understand more about Sierra Leone and the children who live there.

She learned that the Mallory Jansen Memorial School is located in Ngolala Junction, Upper Banta Mokelleh Chiefdom, Sierra Leone. It’s an orphanage and school that supports kids as young as three years old, up through the sixth grade. A little over 1,000 children were enrolled when Martha began her project.

“Due the centuries of repression in Africa and the war ten years ago in west Africa that destroyed almost all economic stability, Sierra Leone has been torn and is still trying to regain itself,” Martha explains. “With these circumstances it is hard to have a sound educational system in the country … Even with the school they have built though it is hard to get the children to the same level of literacy.”

But Martha could see how having access to books could make a big difference: “When a child is literate and educated they can go out into the world and become the future leaders and change makers of the country.”

Her next step was to figure out the kind of resources the library would need—and then start organizing!

Martha began by collecting books. “I had several book drives around my community: at five elementary schools, my high school, the community center, the public library, my church, and an independent book store. I also bought books using funds from donations and fundraising … and applied for a grant from a local charity.”

Right in the middle of Martha’s project, there was an outbreak of Ebola very close to the Mallory Jansen Memorial School. Because of the danger of this disease, the school was quarantined and Martha’s advisor Sarah traveled back to Sierra Leone to help support the children. A school nearby was turned into an orphanage for the many children in the region whose parents died during the outbreak.

Martha was very worried about the children at the school and reached out to see if it made sense to continue the project in the face of the crises.

But word came from the Mallory Jansen Memorial School that the library was still on track and that the need for books was more important than ever—the school had accepted an influx of new children, all who could benefit from the library.

So, Martha continued gathering books and sharing the story of the Mallory Jansen kids. And her community rallied to support the cause. Martha had started with the goal of gathering around 2,500 books. In the end, her project ended up with 3,451—almost 1,000 more than her original aim!

“It surprised me how much a project for people halfway around the world connected me so much to my local community,” Martha notes. “I got the chance to connect with people all over the community as they brought in books, donated funds, and generally wanted to share their support.” 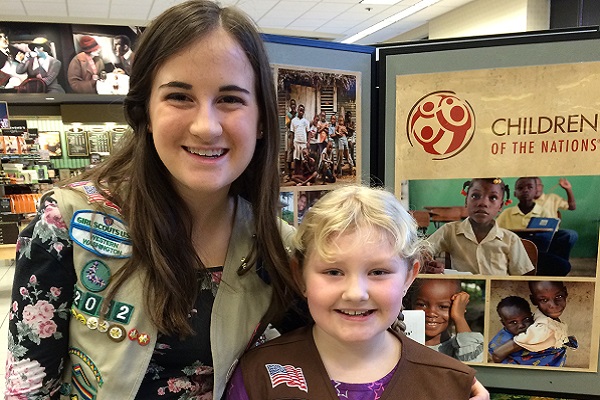 “One of the best moments of the entire project was the day of my book fair when I had a little girl come in who was a Girl Scout in my service unit. For her birthday she had asked all her friends to bring books to donate to the library rather than give her presents and gave me a huge bag full of books,” recalls Martha. “It was such an amazing feeling knowing that not only was I acting to make a change but was inspiring and educating others!”

Taking the Next Steps

This winter, the books are finally getting set out on the shelves in the new library. “I got an email about a month ago when they got the first box of books!” says Martha. The school staff are expecting the second shipment soon. They have Martha’s cataloging system in place, so they’ll be prepared to handle any and all new donations.

Looking back on her project, Martha notes that “Girl Scouts as a whole really prepared me for my Gold Award project. In Girl Scouts you learn leadership, how to organize, and how to talk to people.”

Martha, who is in her senior year in high school, has been a Girl Scout for over thirteen years, and was excited to cap off her experience with the Gold Award.

“I have gained a ton of practical life skills. I have had to learn how to apply for grants from organizations, how to present at meetings to gain support, the importance of making contacts, planning and running major events, coordinating volunteers, time management, setting up meetings in order to ensure sound understanding across the board, the list goes on!”

In short? “I had to be super-duper organized.” 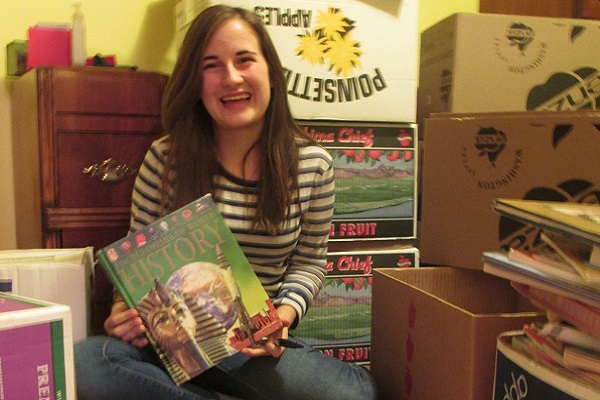 But for Martha, even more than building skills, her Gold Award project was all about helping to make the world a better place. As she puts it, “A big part of Girl Scouts is being involved in your community.”

After she graduates high school in June, Martha plans to continue purpose-driven work: “I’m hoping to do English Literature and International studies and social justice work.”

In a recent essay, Martha summed it up pretty beautifully: “Every time I think [about the new library] my heart grows so full I want to cry, not because I am sad but because I feel so incredibly blessed that I am already living my vision … I may only be 17 years old with a big dream, but those children in Sierra Leone have dreams too—dreams they will share as together we fight for education.”

Well said, Martha—we are so proud of you!

The Go Gold series features some of our amazing Gold Award Girl Scouts. Give us a shout if you know a Girl Scout you’d like to nominate!