This is What Getting Back Up After A Setback Looks Like!

Meet Erin Bailey, a Girl Scout volunteer in Cowlitz County who has learned a lot by serving as a troop leader for Kindergarten and first grade girls.

She has modeled to her girls, through her own actions, that sometimes things won’t go as planned, and you have to keep trying, but half the fun is getting messy while you figure it out!

Lessons in Trying Again After Defeat Colors Your Confidence 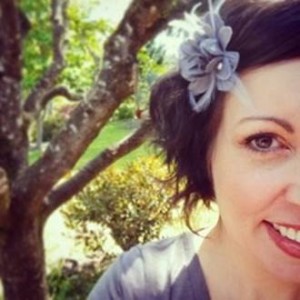 “Being a Girl Scout troop leader doesn’t come naturally for me. I constantly battle doubt and my fear that I’m falling short of my duties to my Daisy troop. That being said, I’m reminded of a quote from Juliette Gordon Low, who founded Girl Scouts in 1912: ‘Scouting rises in you and inspires you to put fourth your best.’ So true!

Last year was my first year as a Daisy leader (girls in Kindergarten and 1st grade). I didn’t have any experience leading–not only a troop of little girls, but anyone…EVER! I was nervous, but I became comfortable in my new role rather quickly. I had a lot of support from my fellow leaders and a co-leader who encouraged my creative thinking and planning.

One such creative plan I had involved introducing the Daisies to the wonderful world of art journaling. I had it all laid out in my head. It was going to be the most magical of meetings–a meeting that would change the world! My Daisies would create such wondrous expressions of their inner beings and an army of artists would be born! It was quite beautiful…in my mind.

The day of the art journal meeting came and I was practically bursting with excitement. My co-leader and I had all our supplies at the ready. I even made simple smocks for each girl (you can’t be too careful, right?), and briefly explained what art journaling was and showed examples of some of my own artwork. Every Daisy was all ears. I had their full attention. This was going to be epic!

My co-leader, parent helper and I began to pass out the various supplies–journals, scrap paper, glue, markers, brushes—and you could feel their excitement grow. The room vibrated with energy. Then we passed out the student grade acrylic paint.

When Life Doesn’t Go According to Plan…

I’d love to tell you that the meeting went according to plan, that my dreams became reality, that tears weren’t shed. But I can’t. Within just moments of passing out the acrylic paint, pure chaos ensued. The noise level tripled. Girls abandoned their brushes and self-control. Paint was flying to and fro, getting everywhere. Tables! Carpets! Chairs! Nowhere was safe! At one point I witnessed a girl smear paint all over her face as if it were moisturizer. It was total mayhem.

I can’t remember too much after that. I was in a daze. I do know that messes were cleaned up, supplies were organized and hands were washed. The meeting was over and I survived.

That was the one and only meeting that year that we did anything with paint. Until last week. Now, I know what you’re thinking. I must be out of my mind to even think of allowing paint back into our meetings! Believe me, I cringe every time I think about those art journals. But I also think about the lessons I learned. Lesson 1: Split into smaller groups. Lesson 2: Use washable paint. Lesson 3: Discuss and be clear about the ground rules. And last, but not least: Don’t be afraid to try again! 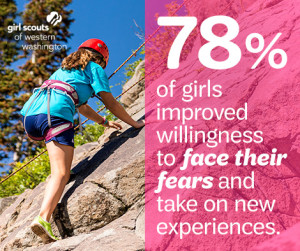 Putting Forth Your Best

So getting back to Juliette Gordon Low’s quote: ‘Scouting rises in you and inspires you to put fourth you best.’ Well, that paint-splattered meeting, chock full of failure, was my best! It was what inspired by my desire for adventure. To open up a whole new world of possibilities to young and impressionable minds, and ultimately, to have fun–that’s exactly what that meeting was! It was epic!

Going forward, I could take the safe and easy approach, providing activities that are mess-free and lackluster. Allowing my fear of failure to dictate my choices and my creativity. Trying to completely avoid stress and chaos. But that’s not me. That’s not my best! I am full of creative and sometimes fanciful ideas. What scares me more than failing is the thought of being too afraid to put forth my best.

Nowadays, when I’m mulling over the plethora of ideas that come to me, I spend more time improving them, using the lessons I have learned, all while learning to lead. To me, that’s success, which is the real art.”

Read an awesome ParentMap story, Embracing Failure, which talks about many of the same things Erin mentions above. Plus, Girl Scouts of Western Washington is referenced in the story, and we are pretty excited!