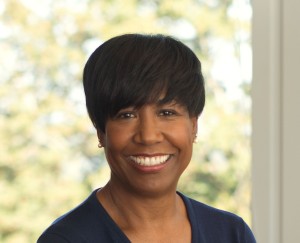 I am known by my family and close friends by the nickname, “A”. But in this story, I would like to tell you about “G” – the first letter of G.I.R.L., which stands for Go-Getter, Innovator, Risk-taker and Leader.

I happen to know a little about Girl Scouts because I was one. I also know about being a Go-Getter, but we’ll get to that later.

I grew up in segregated Virginia, surrounded by a loving extended family. However, all was not right with our country. My parents and so many “Negroes” — as we were called at the time — were determined to achieve an American society where all people were created and treated as equals.

And girls? We were expected to play in our lane. A pretty little PINK lane.

My parents knew that change and equality would not happen by complacency. Change comes by action. We had to stand up and create our equal future.

The Girl Scouts were all about action, fairness and getting things done.

G > Go Getter: To Go. Forward. With Purpose. To Get. To Achieve. To Prepare. To make Progress.

My parents gave me tools to be a Go-Getter reinforced by my Girl Scout troop.

They were tools of leadership, courage, adventure and accomplishment. I have the badges on my Girl Scout sash to prove it! 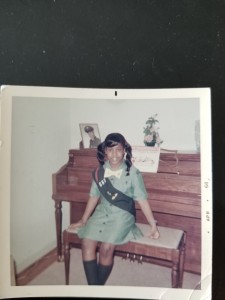 In 1966, at eight years old, I became a leader. I was the youngest of five children to integrate Bellwood Elementary School. I don’t know how my parents had the courage to subject my brother, three years older, and me to an environment they knew would be challenging. But as change makers and go-getters, we went forward to do our duty.  TO CHANGE THE RULES.

Girl Scouting was a natural and perfect supplement to the lessons being taught at home.

Those early days fueled my personal growth and development. It enabled me to be elected 6th grade class president. Taking a stand for all students – all equal. A Go-Getter.

It fueled me to sell enough Girl Scout Cookies to attend Camp Kittymaquan for two weeks, in Tappahanoch, VA on the Rappahanoch River.

It fueled me to join my H.S. yearbook staff as photographer to ensure all students were represented. I went on to become editor in 11th and 12th grade.

Amid the barriers, after receiving my BS degree in Environmental Health, I went into electronics manufacturing — the only salaried woman of color, and one of few women overall — at a plant in Raleigh, NC. I started as a shift supervisor and I was a good one, too, because, at 22, I knew how to treat people.

Amid the barriers, I went to MIT and earned my Master’s in Management because I had a lot more fearlessness to express and “go getting” to do.

Amid the barriers, I ran global businesses, traveling abroad, working through language, culture, customs and biases, where STEM (Science, Technology, Engineering and Math) were the fundamentals in driving innovation and business growth.

Amid the barriers, I went on to run a $5B global automotive group, with 40 plants around the world — as President and CEO. A corporate officer. A wife. A mother. 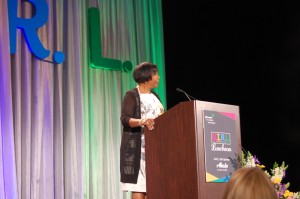 In 2009, I brought a 30-year career in Corporate America to a close. An America I didn’t even know exactly how to dream about in 1966, but I dreamed anyway.

With an undying sense of adventure and willingness to move my family yet again, we came to Seattle in 2010. I joined a 10-year-old company rooted in STEM, with a mission to grow inventors and to use innovation to make the world a better place.

Then in 2017, to become Adriane 3.0., Board Director at amazing companies and institutions. Living the dream. The dream that I learned to dream.

And I am so proud that I have badges on my Girl Scout sash to prove it.